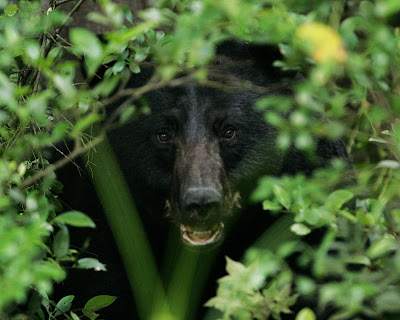 “I don’t remember a dark tree stump there,” I thought, as I glanced right and up a sparse wooded slope in Montana.  I swung some Vortex Viper HD binoculars up and focused the image not more than fifty yards away.  Pin-dot eyes peered back over a red-black snout wide as my thigh.  “Nope, that’s a bear!”

I had hunted this particular western Montana gulley for close to a decade and a half.  A five-hundred yard-wide drainage plain rose from the valley floor two-thousand feet below and narrowed into a sharp-sided defile which spanned no more than two hundred yards ridge to ridge where I stood as though a giant had cleft a slice from the mountain with a mighty axe.  In the years which had led to this moment, I had bumped into a bear perhaps three times there.  This summer in the year 2021, which had passed hot and tinder dry, had been the summer of the bear, however.  I had run into at least five different bears and found numerous poo piles all over the mountain.  One nearby resident had a bear visit them on their deck and scrape claws against their sliding glass door much as dog might beg for admittance so it could share their dinner.  Another swore up and down a grizzly had scooted across their yard—griz have, up to now, been scarce in these parts.  No longer.

I had been on the prowl for mule deer this bit warmer than average late-October morning.  A mulie doe had just jumped up from her bed a few dozen yards to my front and up hill, and I had spent the past five minutes on her trail in the hopes she had dragged a buck along with her.  Under most circumstances when disturbed, mulies will hop (they don’t run as a whitetail does) fifty to a hundred yards away then stop and look back to determine if something is still after them.  I’ve put the zap on many a mulie over the years when they made this mistake.

However, this doe didn’t stop—just headed for the next county.  I wondered why.  Once I found the bear, it became obvious.  She hadn’t detected the bear until she hopped right past its nose, and decided she had a pressing engagement elsewhere.

The doe faded from my concerns as I eyed the quite large bruin who had the drop on me.  If it charged, the steep slope combined with the short distance would have put him in my lap in a heartbeat.  To think I had not brought my proper bear stopping rifle, a Winchester Model 70 chambered in the fabled .375 H&H Magnum.  Hmmm, what to do?

The first thing I do when I encounter a bear is try to stay calm.  I observe the bear.  Is it also calm?  Is it agitated?  Does it have cubs nearby?  In truth, such situations are dictated by the bear, not you.

In this case, the bear just sat on its haunches, much as my Alaskan Malamutes do when they’re on a stair case.  The beast gave me a look which said just one thing, “And you are…?”  It didn’t look agitated, though.  While I had a bear tag in my pocket, I didn’t have my preferred rifle for picking a fight with a bear, as I said before.  Although, I had confidence the .300 Winchester Magnum in my hands could get the job done, with power to spare, the rounds which sat ready for employment in the Savage 111’s magazine contained run-o-the-mill soft-point bullets best suited to deer or perhaps elk.

The bear’s presentation—face forward and hunched into a ball—gave me pause.  If I didn’t hit him square in the skull, the bullet stood a reasonable chance in might not get into the vital thoracic organs.  Bears have dense fur, muscles, and heavy bones.  To make matters worse, the critter sat screened by several pine saplings, mullan stalks, and assorted deciduous branches.  If the bullet so much as nicked anything, it could deflect off course, and a hit even a few inches off could turn my day into a real mess.

Most black bears I’ve encountered will exit the area in a hurry once they figure out you’re a human.  This bear either didn’t know my species, or didn’t care.  The latter possibility concerned me a great deal.  The wind stood slack, so I didn’t think it had smelled me, yet.

A story I had read which detailed a Native American’s encounter with a grizzly popped into my head.  According to the tale, the natives believed it important to talk to a bear in a firm, even voice to assure the bear you were a human, and a brother who meant it no harm.  Many Native American peoples believed bears were humans in different form because once skinned, a bear has a remarkable similarity to a human body.  At this point I didn’t care if I disturbed any nearby deer, so I spoke up.

The bear glanced around, gave a quick lick to its lips, and then tucked its head much the way my Malamutes do when they are chastised for some transgression as if to say, “Oh, okay.  I’m sorry.”  Perhaps I had some skills as a bear whisperer.

Give Me Three Steps T’ward the Door

Then the bear uncoiled and stood on all fours which gave me a good look.  Quite big for a black bear around here, north of 200 pounds, and I try not to overestimate bear sizes.  The fact it had three plus ear spans between its ears when viewed head-on matched its overall bulk.  I had a mature, dominant bear on my hands—this could get ugly.  It pivoted and presented its backside to me.  Now I can say I’ve been mooned by a bear—check that box.

The darn thing fussed around nose to the ground where it stood and another noisome thought edged into my mind: it could have a kill up there.  From bad to worse.  As I contemplated whether to look for the back door and skedaddle, the bruin began an easy walk along the hill side toward my right.  He—I had become quite sure he was a he, now—ambled out from the cover and presented a nice broadside shot.  The urge to shoot welled up inside, and I would have but for two things.  First, the bear wouldn’t stand still, he just kept on uphill.  I have a rule not to shoot bears on the move, there’s just too much chance the shot might cause more problems than it solves.  Second, I had, after all, given this beast a choice.  He had taken the gentleman’s way out, and as a gentleman of my word, I decided to keep the bargain on my end.  Some out there will, no doubt, shake their heads at this, but they should remember I, not they, stood there face to face with this bear and I’ll not brook Monday morning quarterbacks in this matter.

When I arrived home at day’s end, I regaled my wife with the tale.  After she recovered from the shock, we decided to name the bruin, “Mr. Pouty Bear.”  Little did I know I would meet Mr. Pouty Bear again—and soon.  But that’s another story…