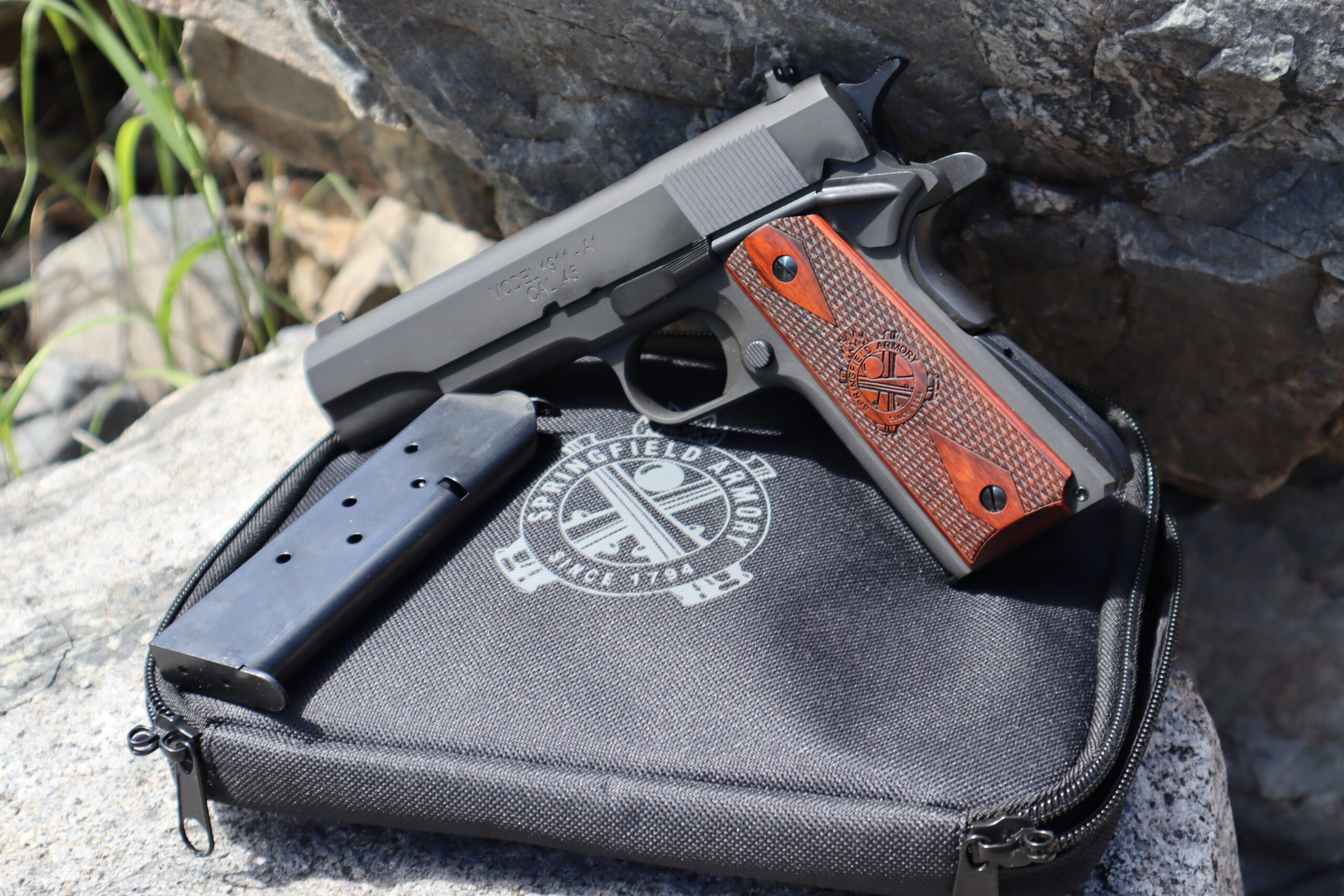 Are budget price 1911s any good?  We got our hands on a Springfield Armory Mil-Spec 1911 .45 ACP pistol, here are our first impressions after a short range session.

The M1911 pistol has been with us for over 110 years.  This timeless handgun has served the United States armed forces as the official service pistol through World Wars One and Two, the Korean War, and the Vietnam War.  It still serves with select special operations units to this day—a record unequaled by any other military pistol in history.

Today, the 1911 is available in more flavors than Baskin Robbin’s ice cream.  Some examples command near five-digit prices.  While the uber-guns out there from custom smiths such as Les Baer and Wilson Combat border on art works, many aficionados still think this old war horse is best served up as close to the way its designer, John Browning, brought it forth to the world over a century ago.

This view has some merit.  The high-end guns are, to many, over massaged, with clearances so tight a new owner must fire several hundred rounds through them before they are combat reliable.  Basic models, made to the original production tolerances, are more able to shrug off dust and dirt and should operate without problems right from the box.

It’s in this vein Springfield Armory brought forth their “Mil-Spec” model.  This is about as basic as their 1911s get, and while the price is not bargain basement, at $863.00 MSRP,  (See the Springfield Mil-Spec here) it is well within the affordable zone as 1911s go.  Question is, do you give up too much for the reduced bite on your wallet?

Everything You Need, Nothing You Don’t

We obtained a new, off the shelf Springfield Armory Mil-Spec 1911 to find out.  As with all Springfield Armory handguns, the Mil-Spec comes in a branded cardboard box, but unlike some low-budget, off-shore sourced examples, Springfield ensconces their gun in an understated, yet tasteful, padded ballistic nylon carry case which protects the gun while it’s in the box.  The gun comes with two G.I.-style, blued steel, seven-round magazines.  One magazine more than the import competition—well played, Springfield.

The gun itself is made with a forged, rather than cast, steel frame and slide both with a matte black phosphate finish—just as the originals delivered to the U.S. armed forces (stainless also available).  This gun is true to the 1911A1 variant as it sports a convex curved mainspring housing (back strap), long spur hammer, and short trigger face.  The match-grade, stainless steel barrel is left in the white, ala the original.

It’s not until you take a closer look at the Springfield Armory Mil-Spec 1911 do you notice the few changes which depart from the vintage pretense.  The aforementioned barrel is cradled in a stainless-steel bushing at the slide’s front terminus, the sights are taller and wider with a white dot on the front blade and while dots on the rear’s wings.  Last, the serrations on the slide have a slight forward cant rather than true vertical.  We liked the improved sights, didn’t mind the serrations, but detested the stainless bushing as it stands in sharp contrast to the slide’s matte finish.  Since Springfield intimates this pistol is designed more for rugged service use than range-queen status, it is incongruous to have an obvious glare source at the gun’s business end.  We plan to look into ways to dull the finish or make it match the slide, although stainless steel shrugs off most conventional finishes.

The gun is completed with attractive rosewood grip panels.  The ones on our gun were dark almost to the point one could mistake them for cherry.  The panels have deep checkering which is omitted around the attaching screw holes in the classic diamond shape found on the early 1911s and some 1911A1s produced for the commercial market after World War One.  As a final touch, the grips are emblazoned with the crossed cannons Springfield Armory logo set mid-panel.  They filled the hand much better than the wafer-thin panels Springfield puts on their other 1911s such as the Ronin series.

We had just a brief time at the range with our Springfield Armory Mil-Spec 1911 due to a busy schedule combined with the present ammunition shortage.  (Tanks fer nuttin’, all you crazed hoarders who continue to vacuum up ammo as though you were Tony Montana over a table piled with prime Columbian bam-bam in Scarface.)

It has been over a decade since our ace gun tester, Nigel, the slightly better than average Ninja, last shot any 1911.  He greeted our Springfield Armory Mil-Spec 1911 with delight and found the recoil much milder than he expected.  The gun’s all-steel, real man-heft soaked up the forces generated by “God’s caliber.”  Given the gun is named the Mil-Spec, we decided to test it with some G.I.- type 230 grain, full-metal jacket rounds.  The Springfield digested them without a hiccup.  In fact it ran so smooth, we have high hopes it will find hollow points to its liking, as well.  Alas, we didn’t have any hollow point ammo available for our range evaluation but rest assured we will put the Mil-Spec to the test at a later date.

If anything is true mil-spec about this gun, it is the trigger pull.  A long, mushy take up followed by a high effort wall that lets off with an anti-climactic shrug.  Pure G.I.

Accuracy ran about what you’d get from any vintage war-production gun.  Nigel kept most shots within a rough, eight-inch group at seven yards.  Although, our slightly better than average Ninja thinks he could do better with a bit more trigger time given how long it has been since he last fired a 1911.

If there’s any thing to complain about on the Springfield Armory Mil-Spec 1911, it’s the thumb safety.  This thing is stiff, I mean S-T-I-F-F, stiff!  It flicks up into the safe position with some effort, but to get it down into the “fire” detent, I debated whether to give it a good smack with a ball peen hammer.  I’ve noticed this before on other entry level Springfield 1911s, as opposed to their upper-tier products.  After I spent five or ten minutes a day for a few weeks snapping the thing up and down it has loosened up a tad, but I wager it’ll take months to get it anywhere smooth.

Also, the barrel bushing feels quite gritty when you remove it from the gun.  A disappointment, but not a show stopper.  The gun is, after all, a service grade weapon.  It stands to reason there are some minor issues when you consider the affordable—for a 1911—price.

You can see the video with Nigel HERE.

All in all we’re quite pleased with the Springfield Armory Mil-Spec 1911.  We liked the vintage tough-guy looks and combat-ready reliability, but the sights are still not up to modern standards and may get upgraded at a later date.  The pistol is not intended as a faithful replica, rather a homage to evoke the guns which served in frightful battles around the world and helped defend democracy against all too many sociopathic dictators bent on world conquest.

If you liked this article and want to help us bring you more and better content in the future, plus get some cool stuff in the bargain, please support us through Patreon.  You can contribute HERE.  Thanks in advance for your support.