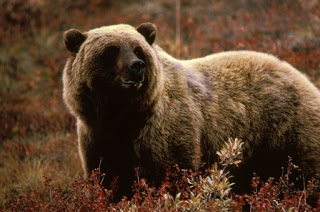 “Walk softly and carry a big stick.”  No where is Teddy Roosevelt’s advice more necessary than when you are in bear country.  Bears are, under most circumstances, solitary and reclusive creatures who prefer retreat rather than confrontation when they encounter humans.  The big “however” are those rare instances when a bear decides, for whatever reason, to pull rank as an apex predator and attack people.  In those dire situations, all the non-lethal bear remedies (shouting, arm waving, bear spray, etc.) will not stop a bear intent on mauling or killing its intended victim.

Bears sometimes give people fair warning (if you know how to speak bear), but more often they surprise their victim.  In either case, bear attacks are fast, terrifying, violent, and often fatal.  Many people who live or travel in bear country choose to carry a firearm for self-defense in addition to bear spray.  So, is there an ideal bear defense gun?

In A Perfect World

Yes there is.  The ideal gun is a proper dangerous game double rifle in a charge stopping caliber such as .470 Nitro Express; a Mauser type bolt-action rifle chambered for cartridges like .375 H&H or .416 Rigby; a big-bore, lever-action carbine; or a 12 gauge shotgun loaded with Brenneke slugs.  However, many people elect to carry a handgun as opposed to a long gun.  The reason is simple.  Long guns are heavy, bulky, and require two hands to operate.  If you need your hands free for other tasks such as holding a horse’s reins, a dog’s leash, or anything else, a handgun makes sense.

The Not So Perfect World

In truth, any handgun is a secondary, or backup, weapon.  They are neither made nor intended for first-line defense.  They are far less powerful than even a low-powered rifle.  For example, a standard velocity 240 grain .44 Magnum load produces around 800 foot-pounds of energy at the muzzle depending on barrel length, while the “anemic” .30-30 Winchester rifle cartridge produces 1800 ft-lbs–over twice the wallop.

Yet, the handgun on your hip is far superior to the rifle you left at home.  Before we examine the various handguns available on the market, we need to understand how one is used during a bear attack. Many people envision a bear charging at them along a forest trail.  Calm as Indiana Jones, they draw their handgun, aim, and fire.  The bear jerks back, like in the Dirty Harry movies, and dies before it hits the ground, a comfortable thirty yards away from the shooter.

The reality is when handguns have been used as successful bear defense, the shooter has often been mere feet from their attacker when the bear leapt from cover.  In many cases, they have slammed the gun’s muzzle right against the bear’s face to fire the decisive shot after the bear got in the first punch and knocked them to the ground.  Yikes!

In such a situation, the gun’s caliber, type, and size is less important than the shooter’s resolve and quick actions.   Make no mistake, this is a down-and-dirty barroom brawl, not a genteel duel at twenty paces.

With this in mind, here’s what to look for in a bear-defense handgun.

One chooses a handgun for the simple reason a long gun is too much to carry.  Therefore, a handgun should not burden you as you ride, hike, or climb in the backcountry.  With a well-designed and fitted holster, an average-size adult can carry a gun which weighs up to forty ounces (2.5 pounds).  Most large-frame revolvers and semi-auto pistols fit this category.  The weight is quite manageable on horseback and in, or on, a motor vehicle.  Revolver choices include Smith & Wesson N-frames, Taurus large frames, and Ruger’s Blackhawk and Redhawk.  Good semi-auto choices are any 1911 clone, and full-size models from Glock, H&K, Sig, X-D, S&W, and Ruger.

If you plan on a long hiking expedition or mountain climb with a heavy pack, you may want a small or medium frame revolver such a S&W L, K, or J-frame; Taurus’s similar models; or Ruger’s GP-100, SP-101, or LCR.  Pistol aficionados will like any good quality compact or subcompact model now on the market.

The super-large handguns, such as S&W’s X-frame, tread close to a compact carbine or shotgun’s weight, and although they are powerful, they are a significant burden.  However, if you plan to visit coastal Alaska or Kodiak Island, you’ll forget about the weight if you’re ever nose to nose with the monster brown bears which live there.

Much ink has been spilled in magazines for decades about this issue, and every cartridge has its proponents and detractors.  Most handgun calibers suitable for defense against human assailants will also suffice for up close and personal bear duty.  The key is not so much the power as the bullet, and where in the animal it is placed.  A .500 S&W Magnum in a bear’s gut may kill a bear–days later–but a jacketed 9mm slammed into a bruin’s brain will sort things out then and there.

Regardless the caliber you choose, make sure you load it with tough bullets which will not fragment when they hit heavy bone and muscle.  Penetration, not expansion, is your friend here.  Jacketed soft-nose, flat-nosed hard-cast lead, and full metal jacketed bullets are the best choice.

Like caliber, this is an argument which will never die.  Each gun type has advantages and disadvantages, although revolvers are perhaps the better way to go here.  While modern pistols are great self-defense weapons, they can and do jam.  If you have to shove your gun’s muzzle against an attacking animal and fire, the revolver is superior.  In such a case, a pistol’s slide might get pushed back far enough to unlock the action, and an out-of-battery pistol will not fire.

Magazine capacity is irrelevant for bear defense.  Bear attacks are so fast, you probably won’t get to fire more than one or two shots.  A gun with five to seven rounds capacity is sufficient.

Whichever design you choose, make sure you carry it in a holster which will keep rain, snow, and mud away from the gun’s moving parts.  I once had a revolver lock up when wet snow got into the crane assembly and froze.  Good thing I didn’t need it in a hurry.  Nothing mechanical is fool-proof.

There are many good handguns out there these days for bear defense.  Pick the one you can carry all day and shoot well, and then load it with tough, penetrating bullets.  Put it in a top quality holster located where you can get at the gun in a hurry from different positions.  Then use your head and your senses to avoid a confrontation with a bear.  Remember, a handgun is a last resort, not a magic wand.