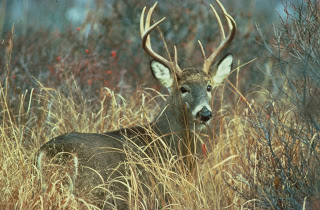 What’s the best way to stalk and kill whitetail and mule deer?  The simple answer is whichever way works.  Trouble is, which ones are those?  Here are five great ways to put the sneak on your dinner.

Deer, to the untrained eye, seem simple creatures.  They roam around, nibble grass and shrubs (sometimes your prize petunias!), poo all over, and make little deer.  To an experienced hunter, whitetail and mule deer are both predictable and wily—sometimes to the point you want to quit hunting and take up golf.  Yet these tasty critters’ simple habits and needs hold the key to a successful stalk.  By stalk, we mean getting down on the ground and finding deer, not lollygagging about in a tree stand or blind while you wait for them to make a mistake.

This is a tried and true method to stalk and kill deer.  One favored by author and hunting personality, Steven Rinella, host of the Netflix series, Meat Eater.  At its most simple, spot and stalk means stake out some high ground and watch the landscape for deer.  Despite appearances, there’s more to this method than you might think.  Here are some key tips to improve your odds. Set up just below a hill’s crest.  This is also known as the “military” crest.  When you stand or sit on a hill or ridge top you are silhouetted against the sky and deer will find you. On cold mornings, set up on a hill’s east face so you can look west as the sun rises behind you.  Deer love to warm up in sunny spots after a cold night, and the light will make their hair almost glow.  Once you spot a deer and decide to work your way toward it for a shot, it helps to have a hunting partner stay at your observation point.  They can keep you on track toward the deer with hand signals while you’re down in the thick stuff.

This is another technique to stalk and kill deer.  It seems straightforward, but has its own nuances which can make or break a hunt.  You’ll need at least three hunters, more are better, for this method.  Select an area which provides cover for deer.  In the western U.S. this often means either an aspen or Douglas fir stand.  Station at least one hunter on the stand’s downwind corner so they can look across the tree front and shoot along it as well.  This person is the shooter.  The other hunters will start at the stand’s upwind end and move through the stand in a line-across formation toward the downwind edge.  Deer bedded in the cover will either hear or smell the drivers.  They will in most cases run directly way from the disturbance.  They will not smell the shooter and often pop into view at the downwind tree line.

One big caution here.  It is vital all hunters in the party wear fluorescent orange vests and hats for safety.  The drivers must maintain visual contact with each other at all times while they push the cover.  If anyone disappears, the entire line must halt until they reacquire the lost person.  When the drivers reach the last fifty yards in the cover area, they must turn ninety degrees and move in line to exit the cover and then reestablish contact with the shooter.  The shooter must only shoot along the downwind edge and never into the cover area.  The drivers should also announce themselves before they break into the open and the shooter must acknowledge their presence before they come out.

Another successful tactic is to find a game trail and stalk along it.  If the cover isn’t too thick, it’s best to walk parallel to the trail ten or twenty yards offset from it.  This reduces scent transfer from you to the trail which may cause the deer to avoid it for days or weeks after you pass through.  If possible, move into the wind or at least perpendicular to it and prepare for close contact as you come around bends or over rises.  Done right, you will stalk and kill deer as never before.

This method is more common in the western U.S. but it is applicable back east if executed right.  It is a good technique if you are after a buck rather than a doe since you can distinguish a sizable buck’s track easier.  It also requires some snow on the ground.  Head out early morning and drive the roads in your hunting area, or walk trails if you’re in an area which prohibits motor vehicles—a mountain bike comes in handy here.  Keep a careful eye out for deer tracks which cross the road.  Stop, but don’t leave your vehicle, and examine the track.  If it is a suitable buck, travel a few hundred yards further, find a suitable parking spot and dismount.  Walk back to the track.  Take care to step in your vehicle’s track, not in fresh snow.  When you reacquire the track you want to follow, retrace your steps for fifty yards, leave the road at this point and move as far off the road as necessary until your tracks disappear into the cover.  Then work your way parallel to the road until you pick up the track again.  This last bit is to keep other hunters from discovering your plan.  I learned this the hard way in Colorado which is piled hip deep with hunters.

At this point, just follow the buck’s track until you find him.  Remember your basic movement techniques, and mind your noise discipline and the wind’s direction.  Look as far ahead as possible, since you may bump the buck and not see him until he stops a hundred or so yards away from you and looks back to determine if you are still after him.  Mulies are more likely to stop and look, whitetails will often head for the next county.  At the same time, stay prepared for close contact, you might almost step on him if he doesn’t detect you.

This is my favorite method to stalk and kill deer.  In this method, you don’t have a good idea where the deer are, but you suspect they are in the general area.  The night before the hunt, make a movement plan based on either maps or satellite imagery.  Keep it simple. Deer are habitual creatures who have small territories—one herd per drainage is normal.  Unlike elk, there’s little need to march over hill and dale to find them.

On morning hunts, start at a drainage’s lower end and work your way upstream to keep the downslope evening breeze in your face.  Walk up a ridge finger with your best movement discipline.  If a ridge finger isn’t practical, walk the drainage’s eastern side in the morning, west side in the afternoon, and stay mid-slope as you move.  Hunt close and mid-range, you never know where the tasty beasts will pop into the open.  Stop and glass the drainage’s opposite side from time to time.  Also, watch for tracks, an area sweep can turn into a track cut or game trail hunt on short notice.