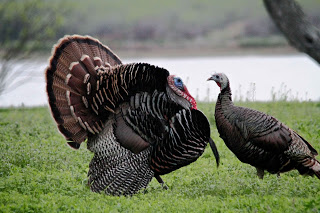 What are the five best turkey guns?  When you talk turkey guns, you talk shotguns for the most part.  Shotguns are, in the main, simple devices: a basic tube for a barrel—smooth inside and out—a receiver to hold the lock work; a stock; and, in some cases, a magazine.  They often have a mere bead at the barrel’s muzzle for a sight.  Although, this has changed in recent times as hunters have added electronic sights to their turkey guns.  There are just three mainstream shotgun actions types: break-open, pump, and semi-automatic.  Although, lever-actions and a few other odd balls have been produced at various times.  Without further ado, here are LocaCarnivore’s choices for the five best turkey guns.

The Stevens Model 94, produced between 1937 and 1984, is a simple, single shot break-action shotgun.  It is light, well balanced, and a joy to carry in the field.  While it has been offered in several gauges, our preference is for the 20 gauge variant.  This gauge offers the best balance between power and recoil.  The gun is so light, any larger gauge would punish the shooter too much.  We’ve used one with a modified choke for years and it has put many a gobbler in the freezer.  Fitted with a short length of pull stock it is also a perfect gun for younger turkey hunters with which to learn the craft.

CZ, based in Brno, Czech Republic, has made top tier sporting guns for over a century.  Their side-by-side double, the Bobwhite, is no exception.  Its barrel configuration gives the operator a wide sight plane.  Double triggers allows the ability make rapid—and silent—barrel selection changes.  No noisy switch to toggle when a gobbler pops up too close for a full or turkey choke.  With a double, you aren’t stuck wishing you had a looser or tighter choke at your disposal.  Besides, there’s just a certain something to the occasion when you take a classic double into the field on a crisp autumn morning.

This internet chat room and YouTube fanboy favorite looks more like a prop for the next action super-hero movie, but beneath its zombie apocalypse exterior is a serious turkey shotgun.  The VR-80 box magazine fed semi-auto has adjustable chokes unlike many so-called “tactical” shotguns, expansive rail space on top for red-dot sights or scopes, and a price so low for this segment one might think RIA suffered a mental collapse when they brought it to market.  An adjustable gas system and the ability to accept most AR-platform furniture make it a top gobbler getter.

Mossberg’s 500 series pump shotguns have more than earned their keep for decades in military and law enforcement applications.  They bring rugged simplicity to the sporting shotgun world.  They are affordable and reliable, with massive aftermarket accessory support.  The author knows one particular 500 which has been dropped, run over, carried in the worst weather for thirty-five years, and hasn’t dropped a beat.  It’s put many a turkey on the table.

Remington’s iconic pump-gun has been the law enforcement gold standard since its debut in 1950.  Milled, all-steel construction along with rugged internal design give it an edge over most every other competitor’s pump shotgun.  As with its arch rival the Mossberg 500, the 870 enjoys massive aftermarket love.  Despite the company’s recent financial debacle, this timeless turkey slapper will no doubt make a stellar comeback.  In the meantime, used examples will continue to escalate in value but are still well worth the investment.  If you want a great gobbler gun, the Remington 870 is it—and our top pick.