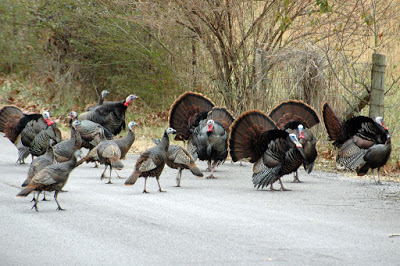 Disclaimer: We provide links to our affiliates that help support The LocaCarnivore Hunter, so if you see any turkey calls you’d like to buy, use our links and help support us.

It’s fall turkey season again! This means if you’re new to turkey hunting, or even if you’re an old pro, chances are you want the best turkey calls out there. But what types of turkey calls are available, and which ones should you buy?

Whether you’re a sit and caller or a run and gunner, it helps to have a call available, not only to call your turkey in but also to locate one.  Although many people find mouth or diaphragm calls their favorites, there are other excellent calls available for both novices and those who prefer friction and other types of calls. There are several types of calls available. These include:

Let’s look at each of them.

The box call is a type of friction call. As the name suggests, it looks very similar to a wooden box with a hinged, sliding lid. To work the box call, you need to run the lid over the edge of the box to make turkey clucks, yelps, and even gobbles. Box turkey calls can be made of a single piece of wood that is hollowed out, or it can be constructed with separate sides and bottom.

If you’re looking for a box turkey call, we recommend the following calls:

Lynch’s Fool Proof Turkey Call is made from mahogany with a walnut lid. Turkey hunters have used this call for more than 75 years, making it a favorite among novices and pros. It’s an easy-to-use caller, which is why they name it fool-proof. Purchase it HERE from Amazon.

Primos Hook-Up Magnetic Box Call is a favorite among turkey hunters because the lid is attached to the box with rare earth magnets, eliminating the guesswork for the correct tension to make purrs, yelps, and clucks. It even has a strap that will help you make realistic gobbles. Purchase it HERE from Amazon.

Turkey pot calls are friction calls that use a “pot” that acts similar to a drum to amplify the sound that has a surface of glass, slate, or metal. You use a “striker” which is a baton-type tool to rub against the surface to elicit a cluck, yelp, or purr.

If you’re looking for pot turkey calls, we recommend the following:

The Primos Hunting Rare Breed Slate Turkey Pot Call is a popular call made from wood with a single piece, wooden striker. Reviewers say this is an excellent call for beginners and pros alike. You can make deeper sounds the closer you move the striker towards the center. Purchase it HERE from Amazon.

The Zink Calls Power Hen Thunder Ridge Series Friction Turkey Calls, Hunter Green, is an excellent slate friction call. Users swear by the realistic sounds that they can easily produce with this call. Most swear this is the easiest to use and most reliable pot call they have. Purchase it HERE from Amazon.

Mouth or Diaphram calls are very popular with turkey hunters, but they require a fair amount of practice to get the sounds right. You put one in your mouth and force air through the latex membrane to make the sound. Hunters who are proficient with these calls are able to make a wide variety of turkey calls including clucks, purrs, gobbles, yelps, and kee-kee runs.

For those hunters who prefer mouth calls, as well as those hunters new to mouth calls, the Primos Hunting Hook Hunter Turkey Mouth Calls are hard to beat. Most hunters who use them are impressed with how easy they are to use to call in a turkey.  Many hunters had favorites, preferring one call over the other. Purchase it HERE from Amazon.

Push-Pull turkey calls are made for people who want to be able to create yelps, purrs, and clicks without the finesse required using a box call.

If you’ve found making sounds with box calls daunting, you might find Hunters Specialties H.S. Strut Push Button Yelper Turkey Call to be what you’ve been looking for. It will make yelps, clucks, and purrs with a push of the button.  It’s so easy to operate, one hunter’s six-year-old child used it with success. Purchase it HERE on Amazon.

Turkey shaker calls are designed to emit a gobble sound by shaking them. They take a little practice to master, but they are easy to operate.

If you find using mouth calls daunting, you’ll be interested in THE GOBBLER Turkey Shaker by Primos.  It’s a simple call that you operate with one hand to mimic Jakes and two hands to mimic Toms. Very loud and works incredibly well with realistic gobbles according to hunters.  Most were surprised by how easy it was to bring in a turkey.  Some hunters have reported that it breaks easily. Purchase it HERE on Amazon.

Locator calls — also called shock calls — elicit gobbles from toms when used. The idea is that the sound is surprising and causes a turkey to gobble, thus allowing you to locate your gobbler.

This is a turkey locator call that makes distressed or squabbling crow sounds. The idea behind it is to give the turkeys a noise that provokes gobbles.  Easy to use, just blow in the mouthpiece to make realistic crow sounds. Although well made and waterproof, the Hunters Specialties H.S. Strut Hammerin Crow Turkey Locator Call requires some adjustments for setting the right pitch, but unfortunately, there aren’t a lot of instructions provided.